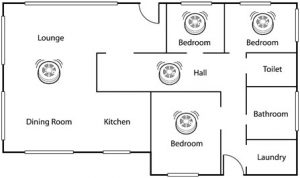 Many lives can be saved with the proper installation of smoke alarms. Sadly, however, statistics show that many lives are lost because people do not have a working smoke alarm.

Smoke alarms should be installed on every level of the house and outside each bedroom. In new homes, according to the NFPA 101® Life Safety Code®a smoke alarm is required in each bedroom. It must be hard-wired with a battery backup and interconnected with all the other smoke detectors so that if one goes off, they all do.

If one is a tenant, and not the homeowner, it is the tenant’s responsibility to maintain the smoke alarm. In addition, as established by the Statewide Fire Prevention Code, “A tenant should not remove or tamper with a properly-functioning smoke alarm installed by the landlord, including removing any working barriers, so as to render the alarm inoperative.”

We at Först Consulting Group are concerned with keeping the residents of Northern Virginia and Washington, D.C. safe. That’s why we offer a number of homeowner services, like homeowner advocacy and homeowner inspections, to serve as an ally and a trusted resource for homeowners.

If you’d like us to check the proper installation of smoke alarms or smoke alarms systems in your home, please give us a call. Don’t wait until there’s a disaster to find out whether your alarm system is working properly.  Contact Först Consulting Group today.