What is an Overdrilled Beam or Stud? 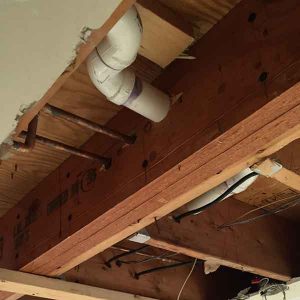 When Först Consulting Group is performing a detailed inspection, one of the things we can cite as a code violation is an overdrilled beam or stud. This is especially critical if it is a structural, load-bearing beam. But just what does overdrilled mean, and how can you spot this construction error?

The International Building Code (IBC) and the International Residential Code (IRC) lay out specific rules and guidelines when it comes to conforming to codes. According to IRC R602.6 for drilling and notching of studs, for example: 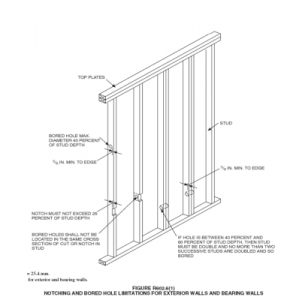 “Any stud in an exterior wall or bearing partition may be cut or notched to a depth not exceeding 25 percent of its width. Studs in nonbearing walls may be notched to a depth not to exceed 40 percent of a single stud width. Any stud may be bored or drilled, provided that the diameter of the resulting hole is no greater than 40 perfect of the stud width, the edge of the hole is no closer than 5/8 inch (15.9 mm) to the edge of the stud, and the hole is not located in the same section as a cut or notch.

Why an Overdrilled Beam is Hazardous

When a beam or stud is overdrilled, it means that either the hole is too big or that it is too close to the edge. When this happens, it compromises the integrity of the beam or stud, and can cause it to crack, splinter or collapse. This is especially important in a load-bearing beam or stud, since these are the components that hold up your house and make it sturdy.

Why are Holes Drilled?

How Först Consulting Group Can Help

If you spot an overdrilled beam or stud, or suspect a contractor’s work, you should contact Först Consulting Group. We can help in several ways. First, we can inspect the work to check for code compliance or violation. You will be provided with a complete report, along with visual evidence, of our findings.

Second, Först Consulting Group can act as a homeowner’s advocate, stepping in between you and your contractor to negotiate any differences of opinion or dispute. Third, you can hire Först as your construction project manager. We’ll monitor work on your home construction or remodeling as your representative, ensuring that all work is done to the utmost quality and meets your satisfaction.

You don’t have to go it alone when it comes to your home. You have Först Consulting Group on your side. If you’re located in the Northern Virginia/Washington D.C. region and need our help, contact us today.